Millie and her friend
748 views - 0 comments

Gallant  Prince of   Henfaes  at Gallantstaff

A Repeat Mating between

4 beautiful pups 3 girls and one boy

Many Congratulations to Murphy's Daughter DiDi 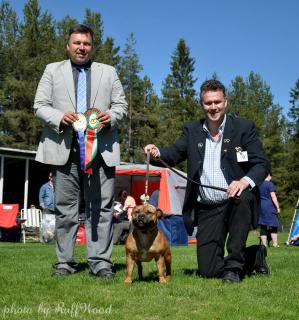 Many Congratulations to Murphy's Son  Nero

Murphy's children at the show with their Mummy BeBe

BeBe is the second from the right

On August the 5th 2012 Tyrara Mr. Paul received his first CC ,many Congratulations

We are so proud  of this litter

Many Congratulations to the owers of Freya,BOB and second Best in Show

Another good result for Murphy and BeBe's pups

Prince of Wales was best Male puppy and BOS

and DiDi was 2 nd best Bitch

Another good day for Murphy and BeBe pups

Another great day for BeBe and Murphy's pups

Freya got Best Bitch and BOB and Best in Show ,well done Freya

This was Freya's first show

DiDi ,has been to 2 shows and got BOB in both,well done DiDi

Mira Still doing very well in the Shows with her daddy Vegard.

We are so proud of Murphy puppies Mira and Chevy born in the Czech Republic.

And now living in Norway with Mette and Ann.

Mira and Chevy attended their first show at 4 months old on the 30th May.